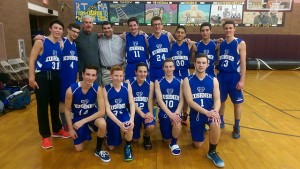 Today Athletic Director Rabbi Richard Kirsch along with coaches Jan Sandusky and David Ptalis rolled out the 2015-16 boys basketball schedule. Both the JV and Varsity Cobras will be home on October 14th to participate in a pre-season scrimmage against YDE. The Varsity Cobras, who open their regular season at home on October 27th against Hillel, will participate in two  tournaments,the Magen David Preseason Tournament commencing on October 12th as well as the Weiner Tournament in Baltimore December 2nd through the 6th featuring teams from throughout North America and one from Israel. The JV Cobras will open their season November 1st at home against Maor and will partake in the Emmunah tournament in the middle of December, with specific dates and opponents to be announced. The Cobras look forward to an exciting and successful season!

No Events This Week

Events are added by athletic staff.
View All Events